Church Culture: What Should be Normal? 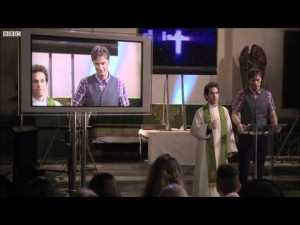 A scene from Rev (BBC)

I have many frank discussions with friends and Ministers about church. Frankly, a lot are in dire need of significant change.

They’re often initially vague about what exactly  it is, but ultimately the list is collected up in a comment about ‘the whole vibe of the thing’.

Culture is everywhere. Language, dress, attitudes and tradition – it’s the assumed environment, the way things are. The detail we take for granted in our own context, and the first things we notice in someone else’s.

Everyone is in danger of becoming oblivious to it, though it’s not passive or neutral. It is nurtured and cultivated, maybe not always intentionally, through repetition and reinforcement.

The culture of a church can be extremely strong. Think about how much of church life is based on the key cultural indicators of ritual, routine, familiarity and symbol. Can you even think of a more ritualistic sub-culture in our community than a church?

And yet because it’s our church, we may never notice it – until some detail is changed. Incredible how people notice the slightest variation on what normally happens.

Culture is influential because it is the barometer of what is understood to be normal, what we take for granted.

So, are the right things the normal things?

We all grow up in families with their own distinct culture, and we all assumed them as normal. But what is normal in one family is foreign in another. From mealtime rituals, bathroom sharing, family in-jokes, ways of communication and a thousand other details.

Even major deficiencies can be assumed as normal. In my experience, many broken young people are not aware of how dysfunctional their home life was until they experienced something different. And many of us have heard individuals defend a dysfunctional domestic situation with the comment “Leave it – it’s just the way things are. It’s normal”.

This applies to large churches, traditional churches, or new missional communities. Something is always normal. But is it right or ideal?

Don’t take culture for granted, even if it’s super contemporary. A culture of cool is not ideal if it breeds aloof comparison and blocks authentic community.

Cultivating an ideal culture is perhaps the most strategic task a leader can undertake. One simply must be intentional about it.

As Christian leaders, unless we are able to influence or shift what is assumed as normal in our church community, then surely we are largely irrelevant to them, no matter how many faithful tasks we busily perform.

Intentionally cultivating a culture that reflects the Kingdom of God and orients the church on its primary mission or purposes is the most important leadership task within a church.

And paramount attention in all this must be given to the central missional purpose of the church, namely, to demonstrate and articulate the gospel of Christ to the chosen culture or community. This may require radical change.

And it is here that questions of culture and mission become deeply pertinent. For what is culturally normal in our church may be distinctly alien to the very people for whom our church exists.

Indeed, we might consider a church culture to be one of faithfulness because it consists of people who have faithfully attended and served the church for many years. However, I would ask if that church has been faithful to a larger missional call, or have we been merely faithful doing the usual things without regard to what alternative there might be?

Have we actually been unfaithful to God by never moving beyond our default comfortable culture to intentionally create opportunities and an environment for mission to occur?

Changing our perspective on our purpose for existing immediately shifts the paradigm of desired culture.

It means asking hard questions of the overall purpose of the church – To whom are we called? What must change to reach those to whom we are called?

Significant cultural change is possible, but it is hard work and requires focused thinking and tough decisions. It will always incur opposition.

But it will force us consider the very core issues related to our purpose and calling. And change is possible.

Many will be familiar with the mid-90’s phenomena ‘Broken Windows Theory’ which rose to prominence in New York City.

First noted in the 1996 book, Fixing Broken Windows: Restoring Order and Reducing Crime in Our Communities, authors George Kelling and Catherine Coles reported fascinating research on the relationship between cultural context and crime.

They found crime was more likely to

happen in a neighbourhood or street where the culture suited the crime. In other words, if a place looked or felt like a potential crime scene, in that it reflected the kind of place one would expect crime to occur (marked by graffiti, vandalism, litter, and you guessed it, broken windows), crime was more likely to occur.

“Consider a building with a few broken windows. If the windows are not repaired, the tendency is for vandals to break a few more windows. Eventually, they may even break into the building, and if it’s unoccupied, perhaps become squatters or light fires inside”

They reported this was not confined to poorer socio-economic related issues – in both wealthy and poor areas, the statistics bore the same result. In essence, they found that context could influence potential crime behaviour. They could change the behaviour by changing the context – and therefore change the culture.

In fact, New York Mayor Rudy Giuliani adopted a policy based on the theory, applying a zero tolerance approach to graffiti, broken windows and vandalism. Within 24 hours, any instance of the above three were fixed by council workers. As part of a wider strategy, crime, especially increased vandalism, dropped dramatically.

What Giuliani attempted was a major culture shift.  He wanted to shift what New Yorkers saw as normal. It would not occur by itself, he had to be strategic and had to make tough decisions.

A preferred church culture does not create itself.

Either Christian leadership will seek to identify and cultivate it, or a combination of the dominant personalities of the community, the sheer force of tradition, or the swamp of immediate concerns will remain the predominant culture-setters.

2 thoughts on “Church Culture: What Should be Normal?”