Why Mad Men Makes Me Want to Stop Shopping 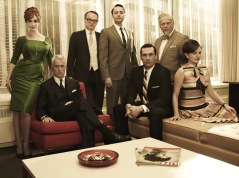 Watching Mad Men recently prompted my thinking again on the immense but subtle role shopping plays in our lives.

The show, in multiple ways, demonstrates a point made by Erwin McManus recently: “We all live in a mythology. Who informs the story you are in?  Whoever tells the best story shapes the culture and creates the future.”

Mad Men has many subtexts, but at it’s core it is a show about identity – who we are, and who we’re trying to be.

We discover quite early that the main character Don Draper secretly swapped his identity with a fallen officer during the Korean War; and we follow copywriter Peggy Olsen in her emerging exploration of personal identity and independence. (sips whisky)

Furthermore, the dynamic of the Ad agency exudes the dynamic of personal status and the politics of who’s ‘in’ and ‘out’. And internally, the competing identity roles of ‘Family Man’, ‘Ad Man’, ‘Career Man’ and ‘Lover Man’ fight it out in a world of sheened artificiality hiding the messy realities of modern life.

Threaded throughout is the core business itself – advertising – the promotion of material goods as the answer to the core desires of life. Mad Men is about the divide between the promise of what can be sold, and the reality of, well, reality. (lights another cigarette)

The production design itself is framed with the sheen of an advertisement. Don Draper is the embodiment of idealised western masculinity, seen from the best angle on every occasion (well almost), and his wife, house and life are embodiments of the idealistic 1960’s catalogue.

We’re all quite savvy and intrigued by advertising these days, partially thanks to The Gruen Transfer, but that doesn’t mean it’s less effective. I’m wondering how many are turned on, not off, by the marketing expose.

Personally, I’m shaking my head at the sheer crassness of the strategy to provoke spending through idealised materialism, and then wondering if ‘yeah, maybe it is time I got a new suit’. (downs the whisky)

Don Draper is the epitome of detached, chiseled, corporate, cool. The superman men idolise, and assume women want them to be. That Mad Men has spawned it’s own fashion line and design renaissance perhaps proves that there’s nothing cooler than irony.

Clive Hamilton in his book Affluenza says, “Today, almost all buying is to some degree an attempt to create or renew a concept of self. Our actions are driven by a desire for ‘self-completion’, we seek to bring our actual self into accord with our ideal self, or who we wish to be”.

I’m intrigued that the Oxford English Dictionary defines Materialism as ‘A tendency to consider material possessions and physical comfort as more important than spiritual values’. Now that’s an interesting choice of words. (lights another cigarette)

Sociologist Gary Bouma talks of spirituality as ‘A set of activities which produce hope‘, and I wonder if shopping may just be the dominant spirituality of our time.

Shopping has become a quest for a personal identity – a new and better me – prompting perhaps the defining question of our age: ‘Are these jeans me?’

Hamilton continues ‘Because it acts as the interface between self and the world, clothing is perfect for providing the bridge between who we actually are and who we want to be seen to be’. This is the serious business of identity formation.

Suzy Freeman-Greene notes in a 2004 article in The Age, ‘The decisions we make about where and how we shop are intimately connected to our sense of self. Marketers know this that’s why they pretend buying sneakers is an identity-forming act’. (orders cocktail)

Hamilton further notes, ‘Cars and houses do the same because people look at us through our cars and houses….a vast marketing infrastructure has developed to help us manufacture ideal selves and to supply the goods to fill the gap between the actual and the ideal’.

Hamilton further explores this complex relationship between us and our possessions, noting that increased shopping in itself is a response to a fragmented society, stating that shopping is a short term solution which, like all addictions, ties us closer to dissatisfaction, ‘The fleeting sense of power that comes with a purchase simply leaves a greater void to be filled’. (downs the cocktail)

This truth is present throughout Mad Men – the unyielding desire for more, be it alcohol, women, status, or money.

Pointedly, Roger Sterling, the character who has finally achieved everything on this list many times over, is the most vacuous, lost, and bored of anyone. His childish, aimless, life pathetically stumbles along, marked by the occasional plead to Joan, seemingly the one authentic thing he has – or wants. (sucks hard on cigarette, frowning)

Joan is a fascinating character, the bruised truth-teller of the agency, who has seen it all and desires another identity as a beloved wife and mother.

But it is Draper who is most fascinating. It is sometimes shocking to watch his decisions, his life containing such a gulf between the perfection of his public identity and his lost, true self. His selfish, consuming behaviour leads him to be well described at one point as being ‘only interested in the beginnings of things’. It is an apt description of our culture.

Mad Men is a brilliantly scripted (and itself highly addictive), disturbing exploration of many underlying myths which dictate much of modern life. That lasting happiness is found in or through material goods. But mainly that our true self is to be found in a utopian dreamland these goods point to.

When our true self ultimately must be found somewhere else entirely, as CS Lewis so beautifully puts it,

‘…all our real selves are waiting for us in Him. It is no good trying to ‘be myself’ without him. The more I resist Him and try to live on my own, the more I become dominated by my own heredity, and upbringing, and surroundings and natural state. ….I am not, in my natural state, nearly so much of a person as I like to believe: most of what I call ‘me’ can be very easily explained. It is when I turn to Christ, when I give myself up to His personality, that I first begin to have a real personality of my own’. (Mere Christianity)

← On Reading Novels
In England →