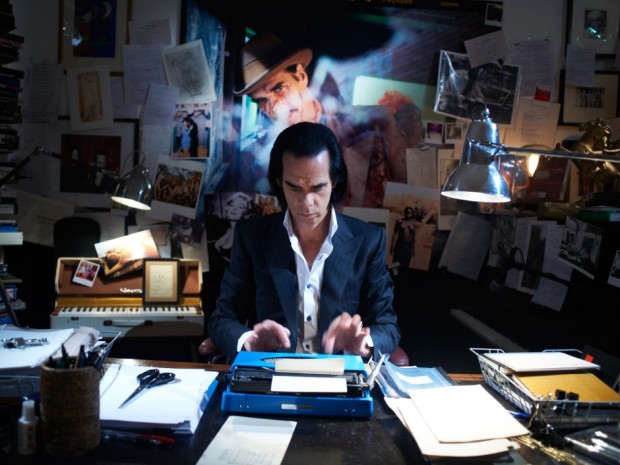 Following the disintegration of The Birthday Party in 1983, but prior to the formation of The Bad Seeds, Nick Cave briefly performed under the stage name ‘Nick Cave – Man or Myth?‘ Two recent biographical documentary films on the artist could each be categorised under one of those monikers.

20,000 Days on Earth, released in 2014, presents the Myth, whilst the more recent One More Time With Feeling explores the Man. They are vastly different films.

The earlier is a highly stylised series of set-piece moments notionally following Cave through a fictional day, his 20,000th. It opens as he awakes at dawn, stands before his bathroom mirror, and speaks of the need to dye his hair.

A series of personal interactions follow, including lunch with Warren Ellis, a car conversation with Blixa Bargield, then Kylie Minogue, and a visit to a warehouse where two keen Cave aficionados are archiving photos and memorabilia from his career, sorting and filing his legacy with white gloves. Cave muses over grainy photos, artefacts of historical punk days in London and south-of-the-river Melbourne. Essentially the film is an exploration of Cave’s creative process, a contrived observation of his world and identity.

At the heart of the subject is Cave’s passion for writing and performing, and how both are vehicles to a personally mythic world. Of the writing, he says “There’s a world that I’m creating. A world of monsters, heroes, good guys and bad guys. It’s an absurd, crazy violent world. Where people rage away, and God actually exists”.

This monologue is coupled with an image of Cave tapping on a blue typewriter (his actual machine is a grey Olivetti Lettera 25) surrounded by novels, posters, papers, pictures. A world of Nick Cave, the Myth.

Cave has always written about mythic characters, unflinchingly so. But it is performance, says Cave, that he lives for. That he feels transported when on stage, saying “It’s that moment when I get to be that person I always wanted to be”.

The stage is the natural home of rock myth. When the lights go down, and the roar goes up, reality is suspended. We want our rock stars to be that; we need them to act out that narrative, to reveal that alternative world of rebellion and dissent. To believe there is a life without restraint, and tapping our longings for transcendent connection by gathering fashion, stagecraft, dance, and viscerally channelling, and climaxing, them alongside the highest of all art forms – music.

Bono says that his aim onstage is always to “shrink the room”, even in a stadium, connecting people in collective moments of unity with each other and the music. Cave’s natural environment is a smaller space. His recent tour in large Entertainment Centres was his weakest, in my experience. Founding guitarist, Mick Harvey left the Bad Seeds in 2009 partly because of disagreements on playing less nuanced music for the larger crowds. He was right, Cave is at his best in a theatre setting, and on his night, is a rock performer of the highest calibre. Essentially because he makes you believe.

I’ve seen Cave and the Bad Seeds around a dozen times over the past 20 years or so. I’ve seen them shrink Festival Hall by the middle of the first song, and then felt it explode with exhilaration by the bridge of the second. With Blixa Bargeld facing the drums, ripping strings from his squealing guitar, and Warren Ellis on his knees swaying and sawing his arms across his violin like a woodcutter over an old trunk, the Bad Seeds, all decked in suits have an masculine, even strangely chivalrous, ambience. Cave at once out front, leaning over the front row, pointing with his long fingers, then discarding the microphone across the stage, sit at the piano, and climax with the band. It is in these performances as well as his isolated writing that Cave inhabits his myth.

Rock myths only perpetuate because they are enveloped in the mask of authenticity. The myth must be alluded to, and never addressed directly. This is the weakness of 20,000 Days on Earth, it presents the myth in such a self-conscious way. It makes the identity of Nick Cave its focus, which feels forced and even precious. By presenting a ‘normal’ day in his life, we are given anything but. A manufactured pastiche of mythic ingredients.

The saving grace of the film is twofold. Firstly, Cave is actually an interesting artist, and similar to most rock biographies, whilst they vary in quality, and are rarely very good, if I’m interested in the artist, I’m gonna read it.

Secondly, and importantly, Cave acknowledges the myth, and celebrates it, indeed even revels in it. In the wink toward hair dye, and reflections on his image. “I can’t reinvent myself (now), and I don’t want to. As a rockstar, you can’t be changing every week to be something different. You have to be God-like”.

This comment, coming in conversation with actor Ray Winstone about growing old, is revealing, and indicates the importance of the symmetry Cave has between himself and his myth. He follows, “It’s all an invention. It just happened early on for me. As a child I think I had a desperate need to change myself to someone else”.  Cave needed the myth, and has grown into it. The film captures the myth, documents the ethereal, intangible world that the characters of his lyrics and books inhabit, the created mythic universe inside Cave. It is a myth he self-consciously inhabits.

Ironically what appears to be the most ordinary, domestic scene in the film now carries enormous emotional weight due to the events that followed. In the scene, Cave is sitting on the couch between his two 15 year old sons, Arthur and Earl, watching a film, giggling and eating pizza.  One year later, Arthur died after taking LSD and falling from a cliff near their home in Brighton.

In retrospect the scene plays the role of tragic segue to the more recent film One More Time With Feeling, which documents the recording of his latest album Skeleton Tree, in the aftermath of Arthur’s death. It is a film about art in the shadow of trauma and its effect on an artist.

Shot in the rare combination of 3D and black and white, by Australian Andrew Dominik (Chopper), the film is a revelation, one of the best and most beautiful in rock history.

The film opens with Cave being told by the director that they will have to reshoot a scene where Cave puts on his shirt. Using this imperfect footage ‘between the scenes’, rather than the scenes themselves, immediately contrasts the film with 20,000 Days on Earth. Whilst that film focused on one day around home, it shielded us from the ordinary. This film actually focuses on Cave at work, recording an album, and yet reveals far more of the ordinary man.

One reason the film succeeds is because it celebrates the one thing that the Rock Star must never show: vulnerability. Throughout, in long, thoughtful interviews with Cave and his wife Susie Bick, they share their sadness. It is never sentimental, nor thankfully voyeuristic. This is the aspect I felt nervous about going into the cinema. The death of one’s child is too tragic for myth.

Thankfully, the film walks the line beautifully, not shirking from acknowledging the trauma, but never it exploiting it either.  It is a film about tender, grieving father, who happens to be an artist.  As much as the film contains gorgeous set pieces around the songs, they provide tender relief between the frank and thoughtful reflections of Cave and his wife.  At one point Bick discusses one of Arthur’s paintings and both her and Cave chat like any proud, grieving couple. Honest, and even insightful, but never overreaching for the sweeping simplistic summary. It’s fragile, yet thoughtful, without pretension.

The arrangement on the Skeleton Tree album itself is sparse, the album consisting of early takes, with songs shorter than they might otherwise grown into. But the songs are beautiful, and even as strong melodies are held back, poised back from their full potential, with rhyming lines disjointed and unmatched. It sounds so beautifully fragile.

It’s predecessor, Push the Sky Away, had a few mediocre songs, but it’s most interesting moments were new territory for the bad Seeds, stark, ambient electronic experiments. This album takes a giant step further, and embraces less linear structures and stronger, stranger loops. It sounds like a whole new musical chapter.

“Nothing really matters, when the one you love is gone,” he sings at one point, before repeating “In my heart, I need you.”

At times the film reminded me of Don’t Turn Back, with its collection of black and white scene-scraps pasted together. However where that films tracked a precocious Bob Dylan dealing with the notoriety of his newfound myth, the subject of One More Time with Feeling is an older man, a family man, compelled to create but unable to face a month of press interviews. Nothing explodes myths like trauma.

In the film, Cave speaks about how this can’t help but change who we are, and how we see ourselves. “Most of us don’t want to change, really. I mean why should we? What we do want is sort of modifications on the original model. But what happens when an event occurs that is so catastrophic that we just change? We change from the known person to an unknown person. So that when you look at yourself in the mirror do you recognise the person that you were? That the person inside the skin is a different person?”

The power of the film is its willingness to pause and sit within the awkward, muddling, painful time. Cave’s voice-over narration (apparently recorded on his phone at random moments over many months) is often both poetic and raw. It’s a film about asking the big questions, and waiting.

One cannot pretend that this film wholly presents Cave the Man. It’s a highly stylised film in its own right, a work of art in itself. There is always some Myth present. Just as there is in us all, sometimes especially – as recent philosophers remind us – in our most passionate quests for authenticity.

The myths we inhabit can reveal rather a lot about us.  “The heart is deceitful above all things, and it is exceedingly corrupt: who can understand it?” said the prophet Jeremiah. A little more recently, Oscar Wilde observed, “Give a man a mask, and he will tell you the truth“.

To that end, we don’t know how much 20,000 Days on Earth and One More Time With Feeling succeed in revealing the true Nick Cave. We only know if they succeed as films, as art.

But truth is the elixir of great art, enabling it to resonate with us, tapping our nerve endings and opening up new planes where we can be honest, even with ourselves. Great art also kindles our longing for truth itself, the material pointing beyond itself to something eternal. By that measure, in these films, the Man succeeds more than the Myth. 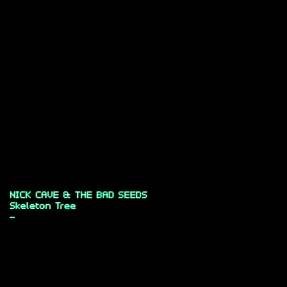 One thought on “Nick Cave – Man or Myth?”