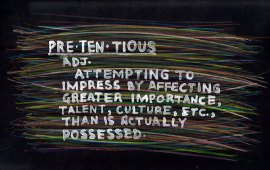 I remember it as one of the two most overused words from University. Dropping “Oh, how pretentious” into conversation over drinks was the ultimate poison putdown.

The other word was ‘irony’ (especially in relation to how Americans just don’t get it).

Ironically, looking back, use of these two words on a regular basis was probably one of more pretentious faux pas’ one might commit.

Saying ‘faux pas’ was another.

But while Alanis Morissette ruined the use of irony for everyone, pretension remains. I like to define it as making up the difference between who we are, and who we’d like to be, by pretending.

My first conversation on pretentiousness occurred around the same time with my mate Brady, as we stood over a controversial front page of his Uni Paper which had mocked up a sexual version of a Bank logo. Brady was insistent it was incredibly pretentious. I agreed.

After a while, I asked him what ‘pretentiousness’ actually was. He could have made something up, but instead told me “I don’t know how to explain it. But you know it when you see it”.

That was both astute and honest. He could have pretended he knew more than he did, but didn’t. Brady is actually one of the least pretentious people I know.

Which was often embarrassing for me because I spent a patch of young adulthood in a delusional mythic reality of pretension. Like a time/space continuum of self-unawareness.

Grunge certainly didn’t help. It was the hipsterdom of the early 90’s, sans glasses (again, unfortunately for me). Hipsterdom is pretension writ large!

Pretention is about playing roles, wearing brands, NOT wearing brands but in a certain l way, dropping names, adding importance, farming a reputation, cultivating an image, and emphasising uniqueness.

It’s serious pretending. Acting as our own subtle PR consultant. A subtle addition to reality. 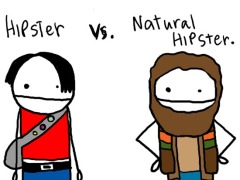 It’s almost understandable that actors and rock & pop stars can be the most pretentious of people, primarily because their entire career is built on pretending to be special, more than ordinary, larger than life. They pretend for a living.

Ironically, however, it is their personal life which nowadays requires a script and image almost as artificial as a ‘real’ film.

Much of the time this works on us and, young and old, we buy into the myth of the superstar. From Justin Beiber to Bono – there’s some pretending goin’ on.

Politicians attempt the opposite, pretending to be ordinary. Sometimes it works and sometimes its pretense becomes awkwardly obvious, as in the case of former PM Kevin Rudd: “Fair shake of the sauce bottle, mate!”

But, by and large, most of us are a little pretentious. Or is it just moi?

Fashion, contacts, house decor, implied wealth, photo’s, conversation, children’s achievements – there’s a million ways we can pretend to be something we’re not. Or not quite. Everything is tainted.

In the end, pretension is about not being truthful. How truly exaggerated is that persona, or that detail? The difference between wearing clothes (or whatever) that reflect ‘who we are’, as opposed to helping become like someone we’re not?

Or perhaps pretension is just over-thinking the whole thing, being too consumed with getting it right.

Facebook doesn’t help  us in this because it invites us to formulate a face of our real lives to the world. In subtle ways we present ourselves from a particular angle, from the photos to what we say about our life. This is certainly our right, but in doing do so it hides the fullness of who we are.

Facebook (and blogs) should be only a minor extension of our genuine relationships, rather than a large totality of who knows us. In a digital age, however, our online presence is becoming a much higher part of our life, and this plays to artificiality and superficiality. Research shows that Facebook only exacerbates feelings of isolation.

There’s a difference between mature emotional awareness which measures appropriate boundaries in different relationships, and someone who builds a ‘public face’.

But most of our pretension subtly shows through our talking. We talk about ourselves all the time. Sometimes it gets ugly. I hear pretension in my own conversation (and in my blog). Ghastly stuff.

But here lies the issue: pretension builds unconvincing distance between ourself and others. It positions an idealised self right between us and everyone else.  It projects how we wish to be seen, but that only furthers the distance from each other.

Our pretensions come from a desire to be accepted or admired. The thing is – and here’s the irony – it’s often quite obvious to everyone that we’re trying too hard. Most of us over-reach.

And then the crowd mocks. The Office was built on popping pretentions and it’s always hilarious from the sidelines. And painful.

But mocking pretentious people is the easiest game in town. Facing it in ourselves is the hardest. Confessing it to God and a friend is the only way I’ve found to try and unwind it.

But I know I’ve met a truly humble and secure person when they show grace to a person everyone else knows is being pretentious.

They listen so well, it’s disarming. You can tell they’re not pretending.

These people are gold. 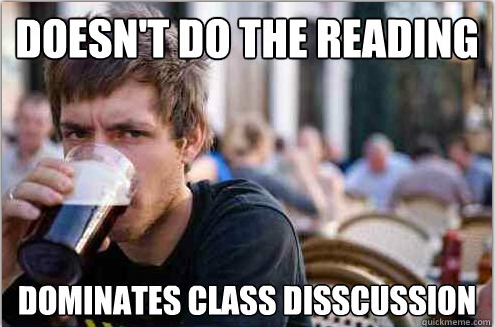 ← What if the Missional Church went Charismatic?
The 10 Most Publicised Abusive Comments about Julia Gillard →